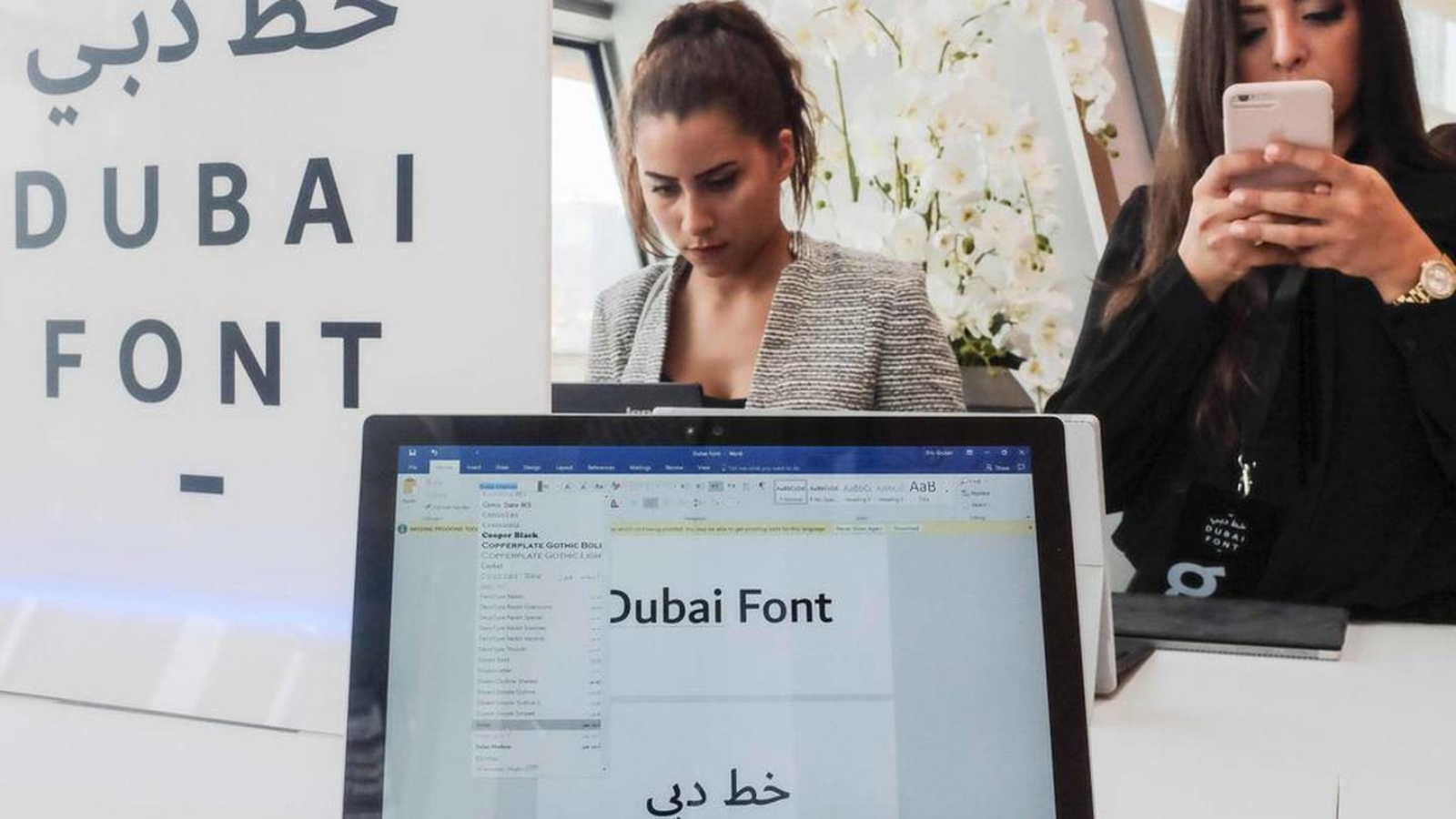 At the end of April, Dubai added yet another acquisition to its steadily growing list of attributes. No longer just a city, an emirate, a tourist destination or even home to the world’s tallest building, the city now also has its own official typeface, the Dubai font.
The product of a two-year partnership between the Dubai Executive Council, the computer giant Microsoft and Monotype, the owner of some of the most popular and influential typefaces ever created, including Times New Roman, Arial and Gill Sans, the font was commissioned in 2015 by Sheikh Hamdan bin Mohammed, Crown Prince of Dubai and chairman of the Executive Council.
The benefits of the partnership that produced the font became clear at its unveiling at the Dubai Opera on April 30. Not only is the font free to download from its own website – it has all the social-media accoutrements that any self-respecting digital campaign could need, including its own hashtag, #Expressyou – but it will also be distributed as a default Arabic and Latin font through Microsoft Office 365.

At a stroke it was made available to Office 365’s 100 million regular users in 180 countries worldwide, and the ambition of the launch caught the imagination of the media; suddenly the quotidian became the stuff of headlines and the usually obscure world of type design became international news.
Such attention to the issue of how and what we write and read may have set typographer’s pulses racing, but there was confusion among the media about just how big a deal the font was – a situation exacerbated by some of the statements that accompanied its release.
“Self-expression is an art form. Through it you share who you are, what you think of and how you feel to the world. To do so you need a medium capable of capturing the nuances of everything you have to say. The Dubai font does exactly that,” the font’s website claims. “It is a new global medium for self-expression. By celebrating the past and embracing the future, transcending all barriers, the Dubai font is the voice of our brave new world.”
Here was yet another example, it seemed, of the city reaching for yet another first with typical audacity. Could a font really be that important? In its race to publish the story, The Guardian failed to get to the truth of the font’s finer print. “This article was amended on 1 May 2017,” the London newspaper admitted. “An earlier version included an incorrect claim that the font was the first to be developed for a city and carry its name.”
If Dubai wasn’t the first city to have a font named after it, what was going on? Was this just a headline-grabbing marketing push or a tilt at city-branding designed to position Dubai as a leader in the technology sphere?
While the Dubai font represents the first typographic collaboration between a corporation and a government and is the first Microsoft typeface to be created for, and named after, a city, there is already a long list of countries and cities that have developed their own bespoke scripts.
In 2014, Sweden adopted Sweden Sans for all of its government, ministry and corporate communications, while in 2010, the Office of the Brand of Abu Dhabi commissioned its own Latin and Arabic scripts, the Zayed the First font, which now accompany the emirate’s logo on newer Abu Dhabi-registered vehicle license plates as well as the branding for the Abu Dhabi Tourism & Culture Authority.
​Aesthetically, however, the approach to font design adopted by the creators of the Abu Dhabi and Dubai typeface could not be more different.