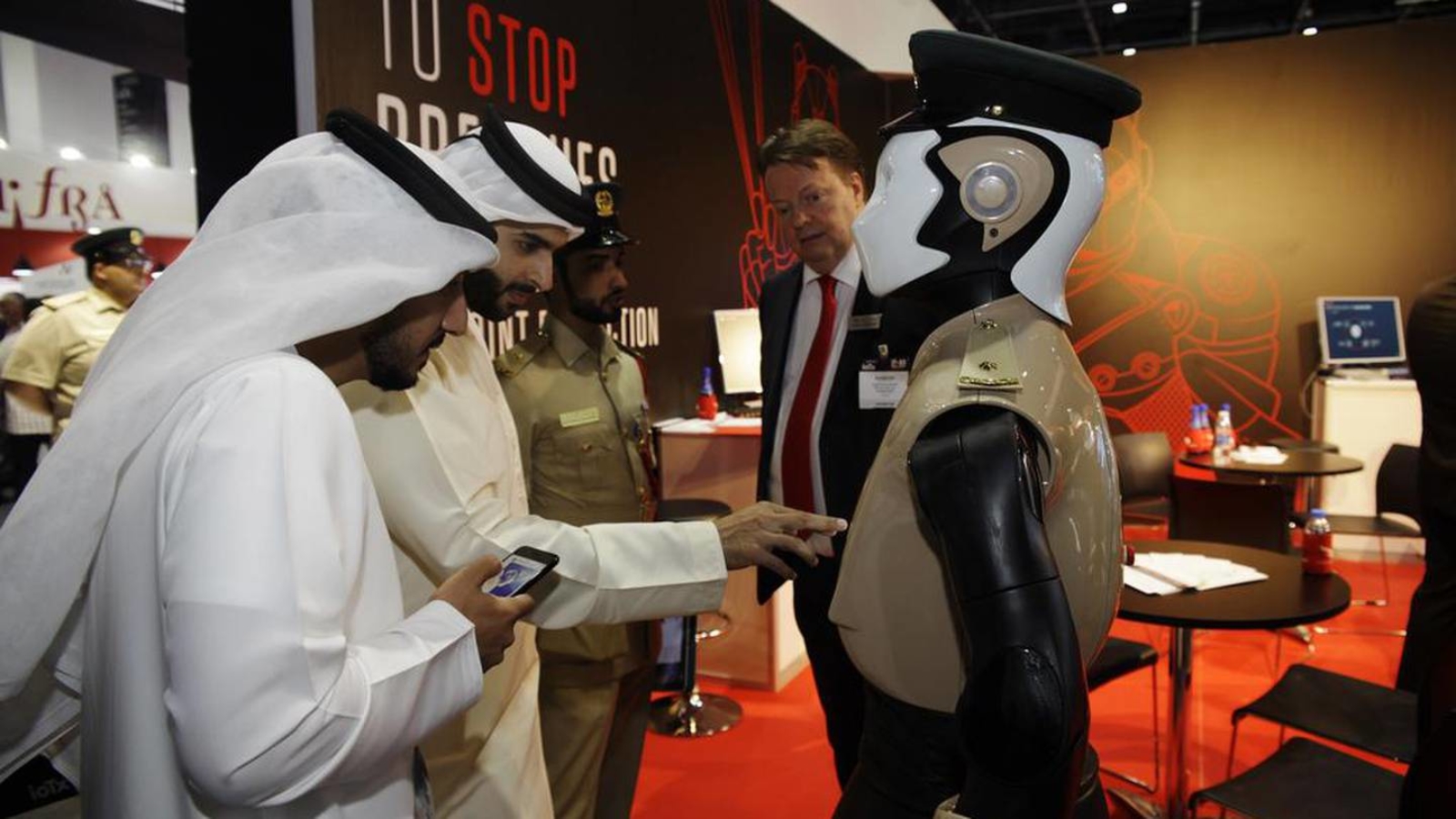 Visitors to the Gulf Information & Security Expo and Conference get acquainted with Dubai’s Robocop.

The country’s first Robocop, versions of which will eventually be used to chase down suspects and nab parking fee dodgers, joined Dubai Police on Sunday.
After interacting with visitors at the Gulf Information and Security Expo and Conference, Robocop’s first job posting will be malls and tourist attractions where people can tap a touchscreen on his chest to report a crime, pay traffic fines or chat in Arabic or English.

“This is the official launch of our first Robocop,” said Brig Khalid Al Razooqi, Dubai Police director general of smart services.
“Now most people visit police stations or customer service, but with this tool we can reach the public 24/7 and it won’t ask for any sick leave or maternity leave.”
The robot’s built-in cameras will stream video to the police command centre.
“It has a smart intelligent system so it can protect people from crime, because it can broadcast what is happening right away to our command and control centre,” said Brig Al Razooqi. “We are also working on facial-recognition systems.”
​

Languages such as Russian, Chinese, French and Spanish will be added to Robocop’s vocabulary.
There are also more than 6,000 cameras installed across the emirate. “We are watching all kinds of activity in the city,” Brig Al Razooqi said. “We protect the sensitive areas.”
The next batch of robots will be used to tackle crime and misdemeanours. There are plans over the next two years for the world’s largest robot, which can run at 80kph.

The 3-metre tall robot will carry heavy equipment and will be manoeuvred by a police officer seated in a cabin inside.
An egg-shaped robot will be used in parking areas to issue warning about traffic violations, and self-driving motorcycles could also be sent out.
Sporting a name tag reading “Dubai Police Robot”, the lieutenant with one star on its shoulder strap was the star attraction on day one of conference. People crowded around, asking questions and taking selfies.

“I was really surprised when it looked into my eyes and said, ‘Hi, Mohamed’,” said Mohamed Elnakib, a manager with a telecommunications company.
“It was creepy but it is also the future. Then I realised it had read my name tag. This will be a fantastic addition because everything is moving towards doing more with fewer people.”
When visitors posed for photos, Robocop said, “Say cheese. Smile for the camera.”

He could have a companion next year depending on budget allocations.
The aim is for about 25 per cent of the force to be robotic by 2030, to enable police to focus on crime prevention.
“We are not going to fire our police officers by replacing them with this tool but with the number of people in Dubai increasing, we want to relocate police officers so they work in the right areas and can concentrate on providing a safe city,” Brig Al Razooqi said.

Police data from the robot will also be shared with the Dubai Roads and Transport Authority to predict traffic bottlenecks.
There were also plans for driverless patrol cars that could issue alerts and tickets for dangerous driving, pending laws regulating the use of driverless vehicles.